Your Edge is here to preview the 2022 NRL Grand Final by digging into three of the key aspects that will decide the premiership.

Like every competitive game of rugby league, it all starts in the middle. The little men look to work their magic and pile up points from there. But, ultimately, it’s down to the time spent without the ball. The best defensive teams consistently lift the Provan-Summons Trophy and we have a team on Sunday that ranks among the best in NRL history.

It’s been a feature of Your Edge for a couple of seasons now, but the Net Yardage numbers so often do a good job of evaluating teams, how they measure up against each other, and whether or not the results are deceiving.

In this case, there are no surprises. The Panthers are at the top of the list after winning the yardage battle by an average of 350 metres per game. They lead the NRL with 1,748 metres per game and pin teams in their own end through Nathan Cleary’s kicking game and elite line speed led from the likes of James Fisher-Harris and Isaah Yeo.

The Eels aren’t too far behind. In fact, they’re second in total running metres and only 36 metres behind the Panthers at 1,712 metres per game. With a big pack and an NRL-high 13.5 offloads per game, the Eels don’t have too much trouble getting up the field. It’s stopping teams coming back the other way that they fall behind and it contributes to the concerns around their defence – more on that soon.

We’ll be keeping a close eye on Parramatta’s yardage game on Sunday. If they’re generating metres they’ll be in with a shot. It’s how they limit Penrith that will ultimately decide the result, though. 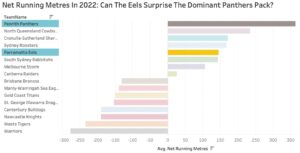 We can see where the Eels will be looking to do their damage in yardage. Reagan Campbell-Gillard, Junior Paulo, Ryan Matterson, Isaiah Papali’i and Shaun Lane lead the charge with roughly 130-155 running metres each per game. They share the load and play big minutes to ensure the Eels push their way up the field across the full 80. 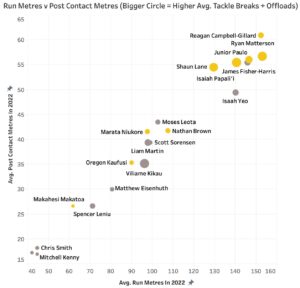 The Panthers rely more on their back three with James Fisher-Harris and Isaah Yeo the only two forwards to be up with the five Eels in yardage.

Dylan Edwards leads the NRL in runs (518), running metres (5,287) and kick return metres (2,174). He’s the catalyst to their set starts which Brian To’o soon backs up with his 198 metres per game or, usually, Taylan May’s 155 metres per game. With May out due to injury and replaced by Charlie Staines and his 133 metres per game from the wing this season, the Eels are just a touch more likely to keep a lid on the Panthers’ yardage.

With the platform set, it’s down to the key playmakers to manufacture points.

The Panthers are masters of building pressure and generating tackles inside the opposition’s 20-metre line. They will work their way up the field and more than likely stay there until the points come. The Eels, on the other hand, scored at a ridiculously efficient rate while beating the Cowboys last week.

24 points for the Eels on 7 tackles inside the opposition 20 metre line.

Just needed time with the ball in the second half and they made the required changes at the break.

Given what we know about the Panthers yardage game and how well they stop the opposition from getting up the field themselves, the Eels will need to continue with their scoring efficiency in good ball. They’re unlikely to see too many opportunities.

It will be down to Mitchell Moses and Dylan Brown to manufacture points. While Clint Gutherson is fairly high up the list thanks to his 14 tries, 18 try assists and 14 line breaks this season, it’s the work Moses and Brown often do inside him that allows Gutherson to pile up the numbers. 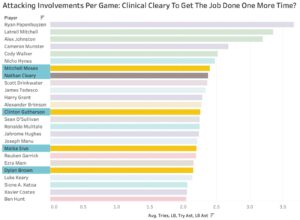 It’s Moses setting up a sweep and using his backrower to engage a defender. It’s Brown taking the line on, digging in deep and firing a pass wider. They are crucial to how Parramatta uses the ball and the most likely source of points on Sunday.

For the Panthers, everything runs through Nathan Cleary. His 57 touches per game are the most of any player featuring in the NRL Grand Final. While Isaah Yeo is a prominent feature of the attack to lead all lock forwards with 31.7 touches per game, he’s the one to set things up before Cleary works his magic. Yeo has only recorded three try assists while averaging 0.19 line break assists per game. He’s not going to be the one throwing the decisive pass in a try-scoring action.

Instead, it will be Cleary – and to a lesser extent, Luai – that do the most damage in good ball. Cleary has scored three tries, handed out 17 try assists and assisted on 14 teammates getting through the line across 16 games this season. His production in attacking involvements far exceeds anybody else in this Panthers side. While it’s a gift to have one of the best attacking players in the NRL controlling things with the ball, it does provide the Eels with a clear primary focus in defence.

Defending To The Death

We’re going to hear it all week.

We’re going to hear it because it’s true. Since 2006, only one team has lifted the Provan-Summons Trophy with a defence that ranked outside the top three during the NRL season.

Unsurprisingly, the Panthers are well-positioned as one of the best defensive teams in NRL history. They conceded the fewest points in the competition throughout the regular season at only 13.75 per game. In their two finals games, the Panthers have only leaked 20 points in total. The Eels, however, haven’t performed so well without the ball. 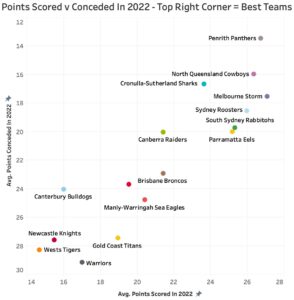 Their 20.3 points conceded ended up as the worst of all Top 8 teams despite finishing 4th on the NRL ladder. Having conceded 27 points to the Panthers in Week 1 and 20 to the Cowboys in Preliminary Final, it’s the area of most concern for the underdogs.

Parramatta are in a good position to compete in the middle given their numbers across the season and recent form throughout the finals. The five forwards mentioned above can hold their own through the centre-third. Given the form of Moses and Brown this season, scoring has never really been a problem for this side. It’s without the ball that is most likely to determine which team ends up as premiers on Sunday. Advantage: Panthers.

The Punters Preview and NRL Draftstars Stats Bible is in for the NRL Grand Final.

The Punter’s Preview looks at try scorer & player performance markets as well as NRL Draftstars stats and advice. If you’re enjoying our free content & data tools, follow us on social media & join our Discord channel where we discuss all things NRL, NBA & Cricket.