We have only three games left of the 2022 NRL season. This week for Your Edge, we’re digging into the deciding factors of both Preliminary Finals.

Week 2 of the NRL Finals didn’t quite live up to the hype, but the Preliminary Finals should make up for it starting with North Queensland Cowboys v Parramatta Eels on Friday night.

These two have played consistent footy all season and carry intriguing storylines into this one. For the Cowboys, they’ve come from nowhere to be one win away from the NRL Grand Final. Talked about as a potential wooden spoon side before Round 1, Todd Payten has worked his magic to drag them into a prelim. Meanwhile, the Eels finally got over the Week 2 hump. The monkey is off their back and this side featuring a number of players that will go their separate ways over the summer is desperate to end their time together on a high.

Both teams perform well in yardage:

The Tom Dearden and Chad Townsend v Dylan Brown and Mitchell Moses head-to-head matchup is one that will go a long way to determining the winner. Dearden and Townsend have struck up an impressive partnership while Brown and Moses are playing the best football of their NRL careers right now.

However, it’s in the backrow that we might see this game won and lost. It’s an area the two teams take a different approach but both first rely on their side winning the yardage game and halves distributing clean ball.

Jason Taumalolo isn’t the metre-eater he once was on his own but he’s still averaging over 150 running metres per game. The difference now, and it doesn’t show in the numbers, is the yardage he generates as a ball player. When he gets deep into the line and attracts multiple defenders, he tips the ball onto a teammate isolated onto a single defender. It has been a key feature of the Cowboys yardage game all year and will be again on Friday night.

As you can see from the average tackle breaks and offload numbers above, releasing the ball and generating second phase is where the Eels make their mark. They lead the NRL in offloads with 13.4 per game and threw 19 offloads in their 40-4 win over the Raiders last week.

You can tell a lot about an Eels performance when looking at Isaiah Papali’i and Shaun Lane. They are both key figures in the Eels attack. Both have set new career-highs in offloads this season as Brown and Moses look to isolate them onto the opposite half before the big backrowers release an offload through what is often a legs tackle.

Jeremiah Nanai has the potential to negate both Eels backrowers on his day, though. A prolific try scorer (17 tries), engaging line runner (8 line breaks) and capable in yardage (98 metres per game), Nanai has played out an excellent rookie season in the NRL. He’s particularly effective in the air on last tackle and his battle against Lane in the air is one to keep an eye on.

There is a lot to like about this matchup. It’s difficult to pick a winner before kickoff. But when we return next week to preview the NRL Grand Final, there is a good chance we’re talking about the edges on one team being a key feature of their Preliminary Final win.

As mentioned above already, the Penrith Panthers are the best yardage team in the NRL averaging 1,736 running metres per game. They’re relentless through the middle of the field across the full 80 minutes. Isaah Yeo is a maestro when it comes to playing his forwards onto the ball. Those forwards – James Fisher-Harris and Moses Leota, in particular – are always available and pushing up around the ball ready to work up the field.

The Rabbitohs, on the other hand, are down on troops. They are 4th in yardage averaging 1,678 metres per game this season but will be without Thomas Burgess and one of their quiet achievers, Siliva Havili.

As we can see below, Burgess has been one of the most effective and efficient metre-eaters in the NRL this season. He has been superb off the bench for the Rabbitohs. His inclusion either side of halftime has allowed the Bunnies to charge through the middle across the full 80 minutes and his absence will be further felt with Havili now being ruled out. 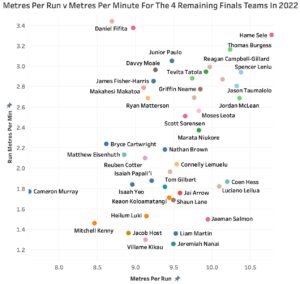 Notably, Spencer Leniu fills a similar role off the bench for the Panthers and produces similarly effective and efficient numbers as the Englishman.

Where the gap does close a touch is in the absence of Taylan May for the Panthers. He has made a home on the left wing and is the hunt for the Rookie of the Year this season. His finishing ability is one thing, but it’s his work in yardage that has seen him selected ahead of Charlie Staines throughout 2022.

The Panthers use their back-three to start sets before the middle forwards get back behind the ball and start working up the field. Dylan Edwards has made a career out of returning kicks at speed while Brian To’o is one of the most destructive players in the game. Staines, on the other hand, isn’t at the same level.

The Panthers still head into this one with an advantage in yardage but there is an opportunity there for the Rabbitohs to exploit and close the gap. Expect Lachlan Ilias to kick towards Staines’ side of the field and force him into a kick return or first-tackle carry where he struggles to make a dent against a formed kick-chase or defensive line.

It all comes down to the yardage game to start, but if the Rabbitohs can enter the Panthers’ 20-metre line and generate enough opportunities to attack in good ball, the points will come.

Latrell Mitchell, Cody Walker and Alex Johnston are doing ridiculous things down the left edge at the moment. Regardless of how well a team studies South Sydney’s left edge, few have the ability to solve their shifts across 80 minutes. Mitchell, in particular, is one to keep an eye on.

As mentioned last week, he doesn’t need to touch the ball often to influence a game. He only registered 25 touches last week but the quality of those touches is unquestioned and shows in his attacking numbers this season. 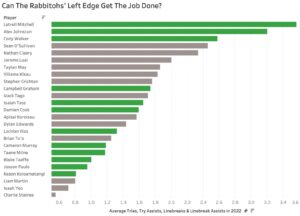 Further down the list and Penrith’s left edge threats – Jarome Luai, Viliame Kikau and Taylan May – aren’t too far behind the Rabbitohs but, again, without May, the edge lacks the punch it has thrown at defences all season. Although, there is a chance To’o slots into the left wing spot for this one which will change the shape of the Panthers’ attack somewhat.

Defence wins premierships and is likely to win this one. The Panthers are the best defensive team in the NRL and have been for years. However, the Rabbitohs attack can score on anybody and have enough points in them to cause an upset on Saturday night.

The Punters Preview and NRL Draftstars Stats Bible is in for the Preliminary Finals.

The Punter’s Preview looks at try scorer & player performance markets as well as NRL Draftstars stats and advice. If you’re enjoying our free content & data tools, follow us on social media & join our Discord channel where we discuss all things NRL, NBA & Cricket.