Time to assess the past week’s Draftstars NBA in-form performers as well as scrutinizing the ownership numbers and winning teams to gain an edge moving forward.

The table-topping Phoenix Suns have won 10 straight with Devin Booker (SF|SG $17,600) leading the charge with plenty of on-court scoring lately translating to good DS scores. Booker is averaging 51.3 DS points across his past three games, up on his season average of 41.4. Only seven games ago he posted a season-high DS score of 71.8, so he’s clearly right up there for Draftstars NBA in-form performers.

The Miami Heat surged towards the top of the Eastern Conference in January with Jimmy Butler (SF $17,700) recording two triple-doubles. Butler is out with an ankle injury for Miami’s next game but he’s someone to keep an eye on, with a four-game average of 58.37 DS points, fresh from a DS season-high of 80.5. Butler has a nice mix of offensive and defensive points behind his scores.

“Andrew Wiggins was a surprise selection as an All-Star starter last week but it seems to have pumped up his confidence having put together three scores of 42.8, 49 and 39.8 up from his season average of 30.6.”

Golden State Warriors forward Andrew Wiggins (SF|SG $11,990) was a surprise selection as an All-Star starter last week but it seems to have pumped up his confidence, to become one of the Draftstars NBA in-form performers. Wiggins’ DS season average is 30.6 but has put together three scores of 42.8, 49 and 39.8, with his defensive game shining in Draymond’s Green absence with a calf injury.

Top draft pick Cade Cunningham (PG|SG $15,250) posted his second career triple-double this week but remains volatile in terms of DS point scoring. Cunningham’s three-game average is 47.5 DS points, up on his season average of 34.5, but there’s a score of 15 in there. He still cannot be trusted.

Toronto’s Gary Trent Jr (SG|SF $11,960) has put together a good run with four games in a row of 30-or-more on-court points translating nicely with a four-game DS average of 45.4 which is well up on his season average of 29.8. He’s nicely priced for a player with a firm starting role.

Joel Embiid (C $23,040) missed the Philadelphia 76ers’ over-time win over the Memphis Grizzlies on Tuesday due to a planned rest day after playing 21 straight games. In his absence, a few 76ers stepped up for big points, namely Andre Drummond (C $8,580), but Embiid will be back next game.

The Brooklyn Nets have been without James Harden (PG $20,840) and Kevin Durant (SF|PF $18,950) lately, with the latter likely to be out until the All-Star Game. Harden has picked up a hand issue which doesn’t seem too serious, but in their respective absences James Johnson (PF $7,720) has found some good form.

Once-popular Portland Trail Blazers pick Nassir Little (PF|SF $9,420) has been ruled out for the season with a shoulder injury, while Washington’s Bradley Beal (SG $16,160) will miss two games with a wrist issue.

“In Embiid’s absence, a few 76ers stepped up for big points, namely Andre Drummond, but he will be back next game, so don’t expect the same again.”

Indeed, slate winner ryang faded Haliburton but owned Curry, Drummond, Maxey and Jackson. The player who broke the slate for ryang was Memphis’ Desmond Bane (SF $11,300) with 52.25 DS points but only 4% ownership. 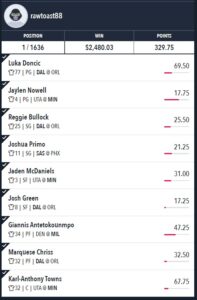