Indeed, with only two sides in action, you only need to pick six players, with flexible roles and a budget of $60k. It throws things around a little bit, especially with two ordinary sides with a few injuries, meaning low predictability.

The Magic were hammered 150-108 by the Brooklyn Nets on Wednesday, while the Pistons were beaten 105-98 by the Eastern Conference leaders Miami Heat.

The Pistons are enduring a four-game losing run, but Isaiah Livers (FLEX $7,160) has been a bright spot with 16 points and six rebounds against the Heat, equating to 30.5 DS points.

Saddiq Bey (FKEX $10,760) had 43% ownership on Saturday while Kelly Olynyk (FLEX $8,670) tends to attract coaches. Bey is consistent without being spectacular but has a high ceiling with a season-high DS score of 55.5. Olynyk isn’t too dissimilar, with a three-game average of 13.6 DS points and a season-high of 45.25.

“Cade Cunningham (FLEX $15,320) is questionable due to illness, so there may be some different players in their starting five, presenting value.”

Magic center Carter Jr (FLEX $13,130) is questionable with a sprained left ankle, along with power forward Chuma Okeke (FLEX $8,090) due to a left knee contusion. Guard Jalen Suggs (FLEX $8,360) is out with an ankle injury.

The Pistons have a few concerns with star forward Jerami Grant (FLEX $10,510) ruled out due to right knee inflammation which may open up some opportunities.

Shooting guard Hamidou Diallo (FLEX $7,160) is also out with a finger problem while top draft pick Cade Cunningham (FLEX $15,320) is questionable due to illness, so there may be some different players in their starting five, presenting value. 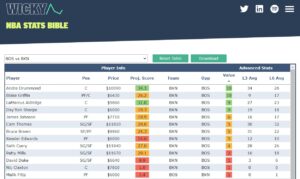 Pistons power forward Livers (FLEX $7,160) was the top value pick in Wednesday’s slate, putting up 30.5 DS points at a $6k price point. Livers got 32 minutes off the bench on Wednesday and has been on an upward trajectory, with a 20.3 DS score on Monday from 27 minutes.

Magic center Moritz Wagner (FLEX $8,870) also made a good impact on Wednesday off the bench, with 17 points and 11 rebounds from 22 minutes leading to a DS score of 35.8, close to his season-high.

Suggs’ absence means R.J. Hampton (FLEX $7,820) should start again and while he didn’t make the most of that against the Nets, the role and price are there. On the flipside, if Cunningham is out due to illness, consider Killian Hayes (FLEX $7,470) who should get more minutes.

The reality with these sides is there aren’t too many genuine premiums. Cunningham’s (FLEX $15,320) top draft pick gives him status but the cloud around his availability is enough to scare coaches off.

There is an argument that if he plays, he could dominate against a side like the Magic – with a season-high of 69 DS points – yet he has only managed DS scores of 15.5, 24.25 and 14.75 against them this season. That’s reason enough to fade.

If available, Carter (FLEX $13,130) could be the player where you spend your top dollar, having good consistency lately with a three-game average of 41.6, up on his 34.8 DS season average.