Friday’s $25,000 NBA Draftstars slate will likely bring out multiple methods of play, with a handful of out-of-reach uber-priced premiums and injured or unavailable superstars opening up the options.

We’ve got some early injury insights, plus some premium and value options to consider. Hopefully we can help you pick a winning NBA Draftstars line-up.

Draftstars coaches tend to steer clear of the over-priced premiums but Joel Embiid’s (C $22,620) form lately had been worth monitoring, but he finally dropped off with a DS score of 39.8 in a heavy 76ers loss to the Celtics. The score was Embiid’s first below 50 in 12 games and first less than 60 in five games.

Interestingly, Bucks Finals MVP Giannis Antetokounmpo (PF|C $23,010) dropped off with 39.8 DS points before being rested due to a sore ankle and returned with a massive 74.5 DS points against the Pacers, showing the value of a break.

Hornets guard Terry Rozier (PG|SG $15,760) has been attracting a bit of ownership lately after a run of DS scores of 65 and 66.5 but he came back to earth with 36.3 DS points against the Timberwolves, even with over-time. Calls on players like him can make or break you as you try to pick a winning NBA Draftstars line-up.

“Terry Rozier has been attracting a bit of ownership lately after a run of DS scores of 65 and 66.5 but he came back to earth with 36.3 DS points against the Timberwolves.”

The Heat have injury problems with Jimmy Butler (SF $16,280) questionable for the game against the Hornets in Friday’s slate with a shoulder injury, while emerging point guard Tyler Herro (SG|PG $12,230) is out with a right knee contusion.

The Nets have all sorts of personnel issues with Kyrie Irving (PG|SG $15,200) ineligible for Friday’s game against the Wizards in Brooklyn due to the New York City vaccination mandate. Nets trade acquisition Ben Simmons (PG|SG $14,130) is working on reconditioning, while Kevin Durant (SF|PF $18,450) (knee) and Joe Harris (SG|SF $7,390) (ankle) are out too. Wizards recruit Kristaps Porzingis (PF $13,560) will not play against the Nets either.

Antetokounmpo missed the first game of the Bucks’ back-to-back earlier in the week with a sore ankle but should be fine, while Grayson Allen (SG|SF $7,740) is doubtful to face the 76ers with a hip issue. Wesley Matthews (SG $6,000) is his probable replacement at shooting guard, although he’s been nursing a toe issue. Pat Connaughton’s (SG|SF $7,530) injury-enforced absent leaves a hole to fill too.

James Harden (PG $18,860) remains unavailable for the 76ers following his switch from the Nets due to a left hamstring injury which will keep him out of the All-Star Game.

New Clippers recruit Norman Powell (SF $12,330) is out indefinitely with a fractured bone in his left foot, while their opponents, the Houston Rockets, were without center Christian Wood (C $14,300) on Wednesday due to illness so he’s a doubt.

“At bottom price, consider Paul Millsap who scored 15.3 DS points in a nine-minute 76ers debut earlier this week, having not played for a month.” 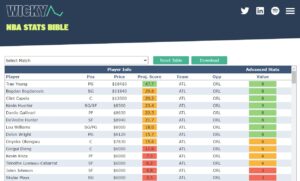 CJ McCollum (SG|PG $15,590) has been a revelation since his switch to the New Orleans Pelicans, boasting a three-game average of 50.4 DS points which is up on his season average of 37.3. He’s enjoying the fruits of a better role with the Pels, thus he’s had higher ownership lately but his price is moving upwards beyond $15k, so take note.

Bruce Brown (SG|SF $9,040) was a standout earlier in the week for the new-look Nets in their drought-breaking win over the Kings with 52 DS points, way up on his season average of 16.6. His value has moved from basement to mid-price and he backed up his 52 with only 18.8, but he has a nice starting role with Irving among other absent.

For a cheaper value pick, we like Mavs forward Maxi Kleber (PF|C $8,720) who played 35 minutes off the bench and scored 19 points against the Miami Heat on Wednesday, resulting in a DS score of 39.5.

At bottom price, consider Paul Millsap (PF|C $6,000) who scored 15.3 DS points in a nine-minute 76ers debut earlier this week, having not played for a month. Millsap was traded from the Nets to the 76ers as part of the Harden-Simmons deal and managed nine points and three rebounds in his brief time on the court, so he may help you pick a winning NBA Draftstars line-up.

“Kyle Kuzma has put together a good run of form, having taken charge in Bradley Beal’s absence and following Spencer Dinwiddie, Montrezl Harrell and Aaron Holiday’s exits, with Porzingis not yet ready.”

The three trump premiums on offer are all super expensive, with Luka Doncic (PG $23,910), Antetokounmpo and Embiid coming in above $22,5k each. The next most expensive – Harden, Durant and Paul George (SF $17,280) – are all out injured, so Draftstars coaches will likely get creative with their money in Friday’s slate.

Wizards forward Kyle Kuzma (PF|SF $16,870) has put together a good run of form, with a four-game DS average of 46.85 up on his season average of 35.6, having taken charge in Bradley Beal’s absence and following Spencer Dinwiddie, Montrezl Harrell and Aaron Holiday’s exits, with Porzingis not yet ready. He looks good against the Nets, who have won their past two after losing 11 straight.