Who’s in form in the NBA and who’s offered value in Draftstars? We’ve crunched the numbers and analysed the past week’s NBA Draftstars trends. Plus we’ve assessed how the recent slate winners got ahead, to give you an insight into the winning DFS formula.

The table-topping Phoenix Suns have won eight of their past 10 games and their past four straight with Devin Booker (SG|PG $15,260) leading the way.

Booker had 48 points, five rebounds and six assists in Tuesday’s win over the San Antonio Spurs. It was a season-high 71.75 DFS points, with 41% ownership, having noted his form. He has a three-game average of 53.8 DFS points, up on his season average of 40.5.

The Miami Heat have surged into contention in the Eastern Conference, winning 10 of their past 13 games and five of their past six. Amid that, Turkish rookie center Omar Yurtseven (C $13,210) has shown his quality, stepping up in Bam Adebayo’s (C $14,570) absence.

Yurtseven has a three-game average of 38.2 up on his season average of 18.7 but the kicker is Adebayo’s return, having played in Tuesday’s win over the Toronto Raptors. Monitor how the Heat handle the pair being available.

OKC’s Shai Gilgeous-Alexander (PG $15,080) is running hot at the moment with two 50+ DFS scores in his past four games, meaning he has a four-game average of 51.44 DFS points, up on his season average of 40.

New York Knicks point guard RJ Barrett (PG|SF $14,340) is another on a good run, with a consistent run of DFS scores around the 40 mark, offering up a three-game average of 42.7 DFS points up on his season average of 29.5.

Warriors rookie Jonathan Kuminga (PF $6,920) is finally getting decent minutes and subsequently producing good DFS scores. Kuminga’s past four scores are 28.8, 42.3, 26.3 and 23, way up on his season average of 10.6 DFS points. Growth in his ownership is among the NBA Draftstars trends.

The Portland Trail Blazers have lost key players in recent weeks, with Damian Lillard (PG $17,940) undergoing abdominal surgery ruling him out until mid-February, while CJ McCollum (SG|PG $13,930) had been out for a month with a collapsed right lung.

Ben McLemore (SG $7,200) – who we discussed in last week’s Draftstars Friday slate preview – and Nassir Little (PG|SF $9,360) have had some good games too. McCollum returned on Tuesday so monitor their trends with him in the side.

Anfernee Simons has found his groove in the NBA with a three-game average of 49.6, which was well up on his season average of 24.4 as he enjoys more minutes. 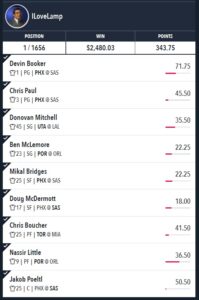 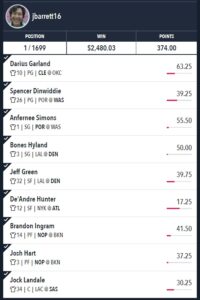 Slate winner dtownsend had an even spread of good scorers which is one of the NBA Draftstars trends for winning sides recently, led by Fox (PG $14,730) with 49.5 DFS points, while Indiana’s Justin Holiday (SG|SF $7,410) contributed 47 DFS points with only 13% ownership to provide a point of difference.