The past week’s NBA slates have offered up some interesting trends that wannabe winners should take note, ahead of more big-money Draftstars slates. We’ve assessed the winning teams, form lines and key player ownership info. 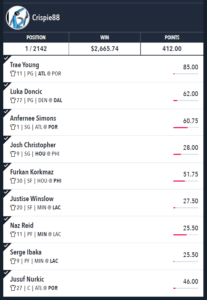 The $25,000 slate winner dtownsend only got the victory by a small margin from sammy, with both owning slate top scorers Jaylen Brown (SF|SF $17,010) and Josh Giddey (SG|SF $13,980), with the former scoring 50 points in a game which went to over-time and the latter recording his first career triple-double equating to 76.25 and 65.25 SC points respectively. The majority of coaches missed the pair who had ownership of 24% and 14% respectively.

The difference between dtownsend and sammy was the victor faded Jerome, grabbing Aleksej Pokusevski (PF|SF $6,000) instead, posting 20.75 DS points to win the slate by 2 DS points. 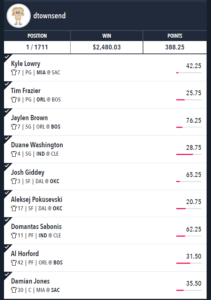 There were joint winners in Sunday’s $25,000 slate with johnnydees and drondron taking it out with the same line-ups led by Bryn Forbes (SG $6,000) who broke the slate at 17% ownership with 41.25 DS points.

Rarely does owning the most expensive player in a slate pay off, but it did for JP4_3 with LeBron James.

On the flipside, the Brooklyn Nets have lost three in a row despite the reunion of Kevin Durant (SF|PF $21,970) and James Harden (PG $23,080) after both had time in COVID-19 protocols. Harden’s numbers are down with nothing above 51 DS points in his past three games, so he’s worth fading.

Celtics forward Jaylen Brown (SF|SG $18,410) is enjoying some career-best form, fresh from a 50-point haul in the over-time win over the Orlando Magic which equated to a DS season-high 76.3 points.

Keep an eye on Mavs All-Star Luka Doncic (PG $19,070) with gun teammate Kristaps Porzingis (PF $16,660) entering into COVID-19 protocols. Doncic scored 62 DS points in the Mavs’ win over the Denver Nuggets on Tuesday with Porzingis out.