The BBL Final takes place on Friday between the Perth Scorchers and Sydney Sixers at Marvel Stadium, which also means there’s a big $30,000 Draftstars slate going on.

Do you go for the uber expensive Mitch Marsh after his failure last time out, under an injury cloud? Or do you just back Hayden Kerr in his upgraded role? And where’s the value amid the Sixers’ injury crisis?

Here’s our BBL Final Draftstars Preview to help you get ahead.

Hayden Kerr’s (BOW|BAT $18,300) role change, elevated to open the batting along with his guaranteed bowling overs, made him the most-owned player in the Sixers-Strikers slate on Wednesday and he delivered. Kerr scored 161 DS points, with all those coming from the bat as he made 98*. It’s unlikely they’ll change his batting role after that display.

Justin Avendano (BAT $10,500) has also been a popular pick in recent slates, although he scored 1 DS point against the Strikers and -10 DS points against the Scorchers. He’ll likely still open given their dearth of options.

Sean Abbott (BOW $16,500) reminded plenty of his premium quality with a bumper 158.5 DS points against the Strikers, while Dan Christian (BOW|BAT $15,500) only managed 20 DS points, worryingly bowling just two overs despite their list of outs.

Draftstars coaches loaded up on Mitch Marsh (BAT|BOW $22,700) in Saturday’s Scorchers-Sixers slate, boasting a 71% ownership but he only managed 35 DS points. This paid off for Saturday’s $25,000 slate winner JaysenMigs who faded Marsh. 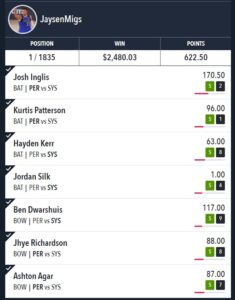 But it’s worth noting the Perth openers did the bulk of the legwork with the bat and Marsh only arrived at the crease in the 13th over, minimizing his run-scoring opportunities. Marsh did not field due to hamstring tightness as the Scorchers bowlers decimated the Sixers. Both occurrences aren’t likely twice in a row but the worry is Marsh’s injury concern may impact his ability to bowl.

Scorchers opener Josh Inglis (BAT $15,400) was a key player in that slate, defying his poor form with 170.5 DS points. Inglis was the fourth most-owned player and that’ll likely go up at his price in this slate.

Jhye Richardson (BWL $17,600) slotted in seamlessly after being with the Ashes squad, scoring 88 DS points on his return and he’s arguably still under-priced given his BBL|10 golden arm effort of 29 wickets.

Check out Wicky’s Stats Bible to see our score projections.

The Scorchers appear to be at full strength, aided by six days off after qualifying for the decider on Saturday, although they are still not declaring Marsh (BAT|BOW $22,700) a certain starter, nor inform if he’ll be available to bowl.

The club said in a statement: “Marsh was included in the extended side after pulling up well from the minor hamstring injury he sustained against the Sixers during Saturday’s Qualifier.

“While Marsh showed promising signs during the week, a final call on his fitness will be made before the game.” So we’re none the wiser in this BBL Final Draftstars Preview.

“While Marsh showed promising signs during the week, a final call on his fitness will be made before the game.” – Perth Scorchers statement

Moises Henriques (BAT $14,000), Steve O’Keefe (BOW $13,500) and Jordan Silk (BAT $8,800) all seemed to pick up injuries in Wednesday’s victory over the Adelaide Strikers too. The latter two may be OK to play after minor calf issues, while Silk seems likely to miss out with his hamstring complaint.

Dan Hughes (BAT $10,900) is racing the clock to be fit after sustaining an ankle injury in the warm-up prior to Saturday’s Scorchers game.

With all their absentees, the Sixers still have some slight hope that Steve Smith (BAT) will be cleared by the BBL to play, so keep an eye on that.

Kerr (BOW|BAT $18,300) has climbed in price, meaning he’s the second most expensive player in this slate, yet Abbott (BOW $16,500) is down in lower rungs of premium territory, so he looks a good option.

Monitor the Sixers’ injury issues and final XI to assess them for cheap options, but if Hughes (BAT $10,900) plays he should get a prime top-order role.

The scalps have dried up for Scorchers leading wicket-taker Andrew Tye (BOW $14,300) who has only four dismissals in his past five games but he is a class act and proven performer at a juicy price.

Perth spinner Ashton Agar (BOW|BAT $16,600) must be considered despite sharing that Abbott price mark, simply due to his fine form at Marvel Stadium. Agar has taken 2-16, 1-26, 2-38 and 2-23 in his past four games at the venue and extracted spin on the used Marvel wicket last game against the Sixers. He also bats at seven as insurance for extra points.

Check out Wicky’s Stats Bible to see our score projections.

The big call is whether you go with Marsh (BAT|BOW $22,700) or not. That may be taken out of your hands if he’s not in the Scorchers’ XI announced at the bat flip due to injury. But if he plays, especially if he’s available to bowl, we like him. He missed out last game due to unusual circumstances as Perth routed the Sixers limiting his opportunity, plus the injury. His ceiling is massive with four 90+ DS scores this season, including 210 and 187.

If you opt to fade him, Kerr (BOW|BAT $18,300) is the obvious fallback, given he’s $4k cheaper and will enjoy a plum role, opening the batting and bowling four overs.

Realistically it’s one or the other for this slate given budget and to further complicate your decision, Marsh’s DS season average is 106.8 compared to Kerr’s 61.8, while Kerr’s three-game average is 109.3 compared to Marsh’s 67.8. A portion of Marsh’s numbers, though, is his bowling, so monitor the bat flip comments and whether he’s bowling in the warm-ups pre-game.