The success of bumper price Mitch Marsh along with the rise of mid-pricer Ben McDermott means there’s no proven formula to success over the past few big-money BBL Draftstars slates.

But we’ve assessed some of the ownership numbers and winning teams to glean some insights and trends to help you find the right balance moving forward.

McDermott was owned by 50% of coaches and delivered 225 DS points. In comparison, Short drew 44% ownership but only provided 8 DS points. Short’s hot run seems over.

In the mid-price category, Sandeep Lamichhane (BOW $12,300) was a major disappointment with 38% ownership but notching up zero DS points. The Nepalese spinner has struggled for impact this season.

Matt Renshaw (BAT $12,600) was the shrewder choice at that price, delivering 88.75 DS points batting at first drop. Renshaw is in good form this season and is worth considering, particularly if he starts bowling his part-time spin. Rookie Strikers middle-order bat Tom Kelly (BAT $9,800) continues to be revelation, scoring 37 DS points leaving 38% owners happy. 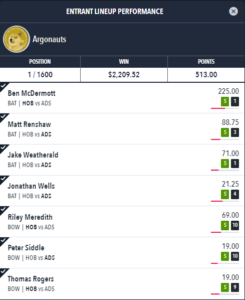 In Sunday’s $15,000 Scorchers-Renegades slate, Colin Munro (BAT $15,600) attracted only 22% ownership yet delivered a slate-high triple-figures score of 101 DS points leaving those players ahead with a point of difference option.

Mitch Marsh (BAT $22,000) is belying the rule of fading uber-expensive premiums as he keeps producing big scores with 92 DS points. Despite his price, his unbelievable form means he had 57% ownership.

On the flipside, in the bargain price Will Sutherland (BOW|BAT $9,400) frustrated his 48% owners with only 2 DS points, although there weren’t too many compelling low-price options with recalled all-rounder Jack Prestwidge (BOW $11,000) the best with 34 DS points.

Mid-pricer Aaron Finch (BAT $16,600) attracted the third-most owners at 42% but only managed 8 DS points. Expect him to be up and down. Munro was the better option at that price point.

Slate winner Hobbsy1 owned Munro and Marsh while left-armer Jason Behrendorff (BOW $14,300) offered an excellent value with 88 DS points at 36% ownership. Munro, though, was the key with his uniqueness.

Mitch Marsh (BAT $22,000) is belying the rule of fading uber-expensive premiums as he keeps producing big scores with 92 DS points. Despite his price, his unbelievable form means he had 57% ownership.

In Sunday’s $15,000 Thunder-Sixers slate, Daniel Hughes (BAT $9,200) emerged from his form slump with a slate-high 105 DS points with 34% coaches jumping on him. They did well to maintain faith given his poor returns but his bargain price made him low risk. Thunder spinner Chris Green (BOW $9,500) was another in that category to deliver, with 59 DS points.

Moises Henriques (BAT $16,700) was the most-owned player in the slate with 47% but only returned 37 DS points, while Ben Dwarshuis’ (BOW $15,500) owners snagged unique points with his 68 DS points return with an active-low 18% ownership.

Slate winner Stimpy870 owned both Hughes, Sams, Henriques and Dwarshuis along with newcomer Jason Sangha (BAT $10,900) who was a revelation with 60.75 DS points in his second game this season. 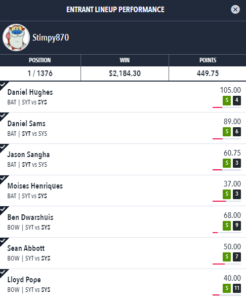 In the Christmas Eve Hurricanes-Stars slate, Ben McDermott (BAT $15,500) top scored again with 111.75 DS points, attracting 39% ownership at his mid-range price. Given his recent knocks, he’ll be a popular option in the Canes’ next slate.

In the bargain basement category, Jordan Thompson (BOW|BAT $9,500) was a major anti-point of difference with 75% ownership but only scoring 2 DS points. Tim David (BAT|BOW $11,100) was the pick of the cheapies with 45 DS points.

The $20,000 slate winner TheFlyingFijian owned McDermott and avoided all those aforementioned premiums, instead spreading the money successfully with mid-pricers Joe Clarke (BAT $14,200) and Tom Rogers (BOW $12,700) surprising with DS scores of 81 and 80 respectively.

McDermott is hard to go past, particularly after his century with the bat against the Strikers, while Marsh’s form line is compelling despite his lofty price tag. The fact that Marsh has been bowling more and more lately for Perth makes him highly attractive.

Scott Boland’s success with the Australian Test team has presented opportunities to Hurricanes bowler Tom Rogers who helped TheFlyingFijian, while Riley Meredith has returned from injury to good effect too.

Thunder batsman Sangha has also been a revelation, swooping on Sam Whiteman being a close contact to a COVID-19 case and making enough runs to claim a spot in their XI. He’ll come under pressure from fit-again Ollie Davies to hold his place but he seems to have done enough.

Sixers all-rounder Hayden Kerr is another bolter who has taken his opportunities, with English all-rounder Tom Curran and veteran spinner Steve O’Keefe going down injured and import Chris Jordan finishing up his five-game spell.

Aussie T20 skipper Finch has drawn a lot of ownership since his return from a knee injury given his deflated price after a poor BBL|10 but monitor him ahead of Wednesday’s slate against the Hurricanes as he was limping in the field on Boxing Day. He’s no lock to play. James Seymour would be his likely replacement.