Offloading Their Way To The Prelim

The Parramatta Eels and Canberra Raiders are playing for a spot in the Preliminary Final on Friday night.

They’ve taken very different paths to this point, though. The Eels have been one of the most consistent teams in the competition to have been inside the Top 8 since Round 1 of the 2019 season. Meanwhile, the Raiders were barely a chance of finishing inside the eight towards the end of the season. It wasn’t until Round 25 when the Raiders faithful finally accepted that their dreams of an unlikely spot in the finals were a reality.

While the two teams have played out different seasons, there is one area of the game they have in common: Offloads.

The Eels and Raiders rank 1st and 2nd in the NRL in offloads per game at 13.2 and 11.7 per game, respectively.

The top offloaders in this match are where you would expect on the list below. Ryan Matterson, Joseph Tapine, Junior Paulo and Josh Papalii are all middle forwards that look to get their arms free in yardage and promote a second phase. However, it’s a little bit further down where you can get a better idea of how the Eels use the ball and get up the field.

Shaun Lane, Will Penisini, Isaiah Papali’i and Tom Opacic. Parramatta’s edge backrower and centre combinations throw a lot of offloads. All four average over 1.2 offloads each per game. We know the Eels are at their best when Lane and Papali’i, in particular, are getting up the field in yardage. They average 144 metres each in games they win compared with less than 130 metres in those they lose. The offloads, both those they throw and those they receive from their centre outside them, are crucial to Parramatta’s success.

In contrast, not one Raiders outside back throws more than one with Nick Cotric leading the way at 0.8 offloads per game. 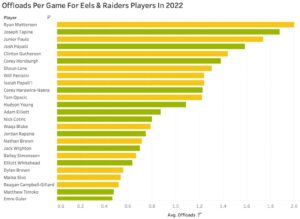 It has been a tricky learning experience for the Raiders when it comes to offloads. They led the NRL in offloads after Round 6 but ranked dead last in yardage at the same time. Losing to the Panthers in Round 7 and Warriors in Round 8 to be 14th on the NRL ladder with only two wins in eight games, it’s remarkable that the Raiders have come this far. Their improvements show in the yardage numbers. The Raiders now rank 10th at 1,515 metres per game. With the offloads sticking and the big middles using them to get up the field, the Green Machine is finally rolling.

More offloads won’t guarantee a win, though. The Eels threw 20 in their 26-0 Round 22 loss to the Rabbitohs. The Raiders threw just 14 in total when losing back-to-back games in Round 22 and 23. However, it’s a key feature of both sides at their very best so expect to see plenty of arms getting free in the tackle before forcing a pass out the back to a teammate.

It reads Cronulla-Sutherland Sharks v South Sydney Rabbitohs on the ticket stub, but the battle between Nicho Hynes and Latrell Mitchell will go a long way to deciding this one.

While Hynes and Mitchell will be the focus on Saturday night, they will do their damage in different ways.

The Sharks will set themselves up to target weaknesses in the Rabbitohs line. Hynes will be playing two or three tackles ahead of the ball. Two or three sets ahead, at times. He has learned how to position his side to maximise the attack by passing players into spots on the field before positioning himself to throw the crucial pass on a point-scoring shift. Touching the ball over 60 times per game, Hynes has used it to hand out 28 line break assists (1st in the NRL) and 20 try assists (4th). Hynes’ organisation of the side – along with Craig Fitzgibbon’s impact – has translated into the Sharks averaging 23.2 points per game (7th), up from 21.7 points per game (8th) in 2021.

Mitchell, on the other hand, stands out as an outlier when looking at touches v attacking involvements (tries + try assists + linebreaks + linebreak assists). 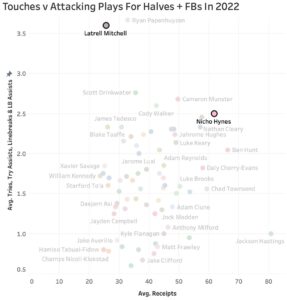 Following Week 1 of the NRL Finals, however, Mitchell was talked about as the best on the ground and potentially the first $2 million dollar man in the game. The numbers:

In what can be perceived as laziness or a lack of effort, Mitchell picks his spots. In just 15 games he has piled up 15 try assists (11th) and 23 line break assists (2nd). We don’t have the numbers to highlight the influence his sheer presence has on a shift when he doesn’t touch the ball either. But that’s it for Mitchell, he doesn’t need to touch the ball too often to influence a match.

Sharks v Rabbitohs is a blockbuster. It’s a coin flip for who will meet the Panthers in the Preliminary Final. But when it’s all said and done, we’re more than likely going to be talking about Hynes or Mitchell as the difference, and be talking about them in totally different ways.

Of the six teams still left in the competition, a couple of names stick out when looking at missed tackles and errors across edge players. 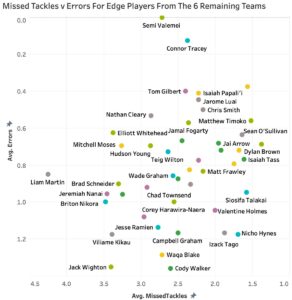 Cody Walker is one of the most dangerous attacking players in the NRL but has an error in him when things aren’t going right for the Bunnies. Similarly, the gap between Jack Wighton’s best and worst games can typically be summed up in his error count. He has finished eight games this year with more than two errors. The Raiders won only five of them.

Liam Martin misses an alarming number of tackles. Hynes and Dylan Brown miss very few for the position they play and the number of times they would be targeted in the line.

One missed tackle or a momentum-shifting dropped ball can make or break a season at this time of the year. It’s the little things that will determine which team lifts the trophy in three weeks time.

The Punters Preview is in for Week 2 of the NRL Finals as we look to back up a monster $91 first try scorer play in Week 1.

The Punter’s Preview looks at try scorer & player performance markets as well as NRL Draftstars stats and advice. The NRL Draftstars Stats Bible is up and running for the weekend ahead, too. If you’re enjoying our free content & data tools, follow us on social media & join our Discord channel where we discuss all things NRL, NBA & Cricket.