One of the best ways to get better at picking a successful Draftstars team is to learn off the best and there’s plenty to learn from the past week’s winning line-ups across the big-money slates.

There were joint winners in Wednesday’s $30,000 Draftstars slate with offthemap and Texcoin both having the exact same line-ups.

The player who broke the slate, though, was Toront Raptors’ center Chris Boucher (PF|C $11,430) who delivered 61.75 DS points with only 7% ownership, leading to offthemap and Texcoin’s success. 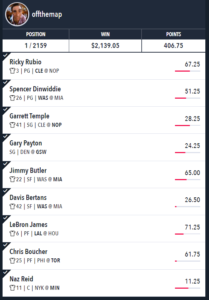 Brooklyn Nets star James Harden (PG $20,930) has been dominating since returning from COVID-19 protocols and he top scored for Tuesday’s $30,000 Draftstars slate with 77.5 DS points with a 57% ownership; the third highest. 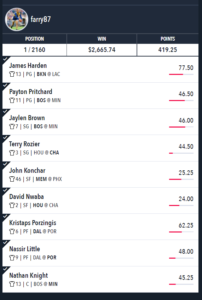 Ironically it was Boucher (PF|C $11,270) who was the most-owned player in Monday’s $25,000 Draftstars slate but he under-delivered leading to his ownership drop for Wednesday. The Raptors big man only managed 30.75 DS points for his 59% owners.

The slate winner JP4_3 faded Boucher but included bumper-price top scorer Nikola Jokic (C $22,230) who produced 73.5 DS points with only 14% ownership. There were few high-priced premiums this slate but the Serbian usurped Joel Embiid (C $19,500) for output with 61.75 DS points.

James Harden (PG $21,520) has been in rare form this week but it must be noted that’s been without Kevin Durant (SF|PF $22,030) in the team. The latter was due to return in Friday’s slate so don’t expect the 2018 MVP to maintain those lofty DS scores.

LeBron James (SF|PF $22,680) has also been churning out some fine numbers as he reverts to a role as the Los Angeles Lakers center in Anthony Davis’ absence. With Davis out for another few weeks, he may continue to score big but he’ll come at a premium.

Kristaps Porzingis (PF $19,230) is the other premium with hot form, with a three-game average of 51.3 DS points up almost 12 points on his season average. Porzingis has stepped up for the Mavs with Luka Doncic out of the side.

Cavs guard Ricky Rubio (PG $14,630) was the other player we intended to highlight but sadly he’s gone down with a season-ending ACL injury so scrub him from your plans.